We're sorry but all Type options for this product are currently out of stock.

You can be notified upon their arrival by choosing the Type option you are interested in and then entering your email in the box below. 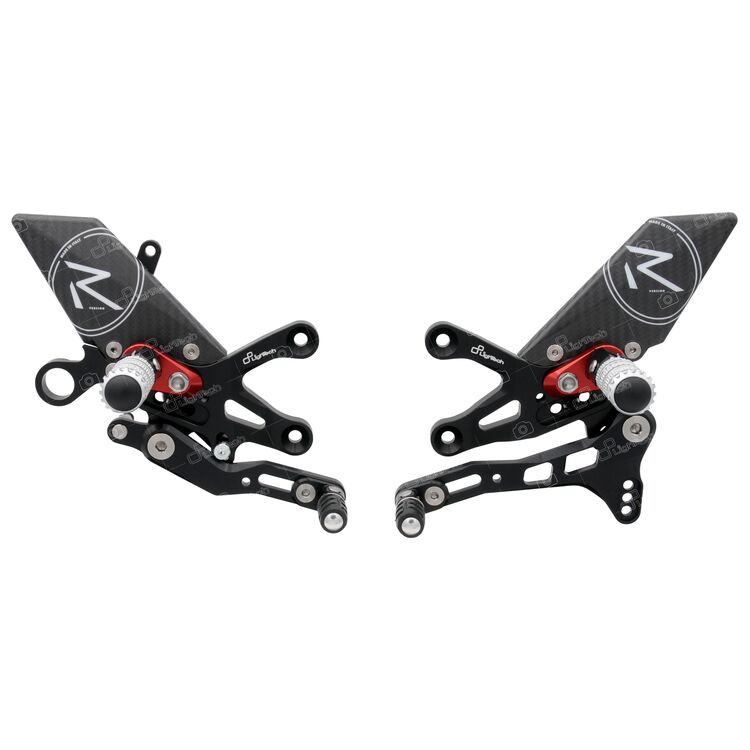 This item is available as a Blem/Refurb. These are items that cannot be sold as "New" merchandise and are limited to stock on hand. See the product details for a description of the product's condition.

Some say in order for something to be art it must have no function, Lightech begs to differ. Their rearsets are beautifully designed and manufactured in Italy. They have been crafted and perfected through years of sponsorship and technical partnership with MotoGP, Moto2, and World Superbike Teams. These are true art pieces, designed to go fast.

The R Series of rearsets from LighTech are in a class of their own. The rearsets themselves are crafted from billet T6061 aircraft grade aluminum for maximum crash durability. The large mounting plates have been machined with additional thickness in key areas to reduce flex. Special bearings from Sweden’s SKF (the world’s leading bearing manufacturer) allow for ultra smooth shifting and braking. Included in every box is a full set of grade 5 titanium hardware. Titanium is not only stronger and lighter than traditional steel or aluminum hardware, it is also exceptionally corrosion resistant. Last but not least, all LighTech R series rearsets feature hard anodized red secondary peg brackets, red R logo and carbon fiber heel guards with interwoven red accents. Any way you look at it, no corners were cut in the design of the LighTech R Series Rearsets.

LighTech's patented Track System Technology offers a one of a kind method of mounting the foot and toe pegs. Most rearsets on the market require you to remove the entire unit to replace a foot peg or toe peg. The Lightech Track System Rearsets feature a secondary bracket with independently mounted foot and shifter pegs. This system allows you to remove and replace either pegs without removing the entire rearset.

The LighTech R Series Rearsets are like nothing else on the market. Included in each kit is a set of grade 5 titanium hardware. Titanium hardware holds many advantages over stainless steel hardware including strength, fade and corrosion resistance and a superior finish. The bearings found in the pedal pivots are manufactured by the world leader of precision bearings, Sweden’s SKF. To further separate the R Series from the crowd LighTech has incorporated carbon fiber heal guards with red accents and red anodized footpeg mounting plates.  LighTech's patented Track System features footpegs that are mounted on a secondary bracket and separately mounted brake and shift pegs that can be removed and replaced independently of one another. This system makes it super easy to make repairs at home or between track sessions. LighTech Reasets are CNC-machined from billet 7075 aluminum with a hard black anodized finish for all-season durability. These are true art pieces, designed to go fast.

This item is also available for 82 other models: